On a recent trip to Germany we noticed that fuel prices were roughly $2.50AUD a litre for petrol and $2.75AUD a litre for diesel compared with $1.95AUD and $2.25AUD on average in Australia.

Despite this, the average German spends less on fuel than the average Australian while travelling similar yearly distances [1][2]. Here’s four ways to save on fuel costs like a German.

Fuel is more expensive in Germany because of environmental taxes added to the per litre price of fuel so German motorists are used to higher fuel prices. While Australians don’t have this tax, we can’t get too complacent.

As of 2005, conventional oil production has declined, new sources of oil are getting harder to extract (shale oil, tar sands) and Australia has exhausted most of its oil supplies and now imports around 90% of its oil [3][4].

Even if Australian or foreign government intervention to prevent catastrophic climate change does not severely limit fuel supplies (or climate change itself), expect that fuel prices will trend higher in the future even if they continue to fluctuate.

The Russian invasion of the Ukraine has sent prices skyrocketing due to sanctions, yet Russia accounts for just 12% of the world’s oil supply [5]. This is worth keeping in mind if you have to buy another car in the future.

2. Buck the SUV trend and get a smaller car

If we had to describe SUVs in a word, it would be “disappointing”. On the odd occasion that we’ve been in one, we’ve found there’s hardly any extra interior or luggage space and they feel like a land yacht to drive in comparison to a good small/mid-sized vehicle.

Luggage space can be augmented in smaller vehicles by getting a wagon where possible or using a roof pod to carry extra luggage when needed.

Whilst Germany does have a lot of small diesels, their fuel savings are marginal compared to the difference in vehicle size and weight [7].

Small cars pay you back in three ways:

3. fuel costs are a quarter of your running costs

It feels like the hyper focus on fuel prices distracts motorists from the fact that car based transport is expensive in general. Generally, registration and insurance make up a quarter of your car costs, fuel another quarter and depreciation, repairs and consumables make up the rest.

So in the grand scheme of things, the average Australian is paying $1000 a year or more on fuel which bites, but it can be easily outstripped by a vehicle price rise or a major component failure.

So what to do? As mentioned earlier, a smaller car can halve your depreciation costs (the money you have to put aside to get your next car as yours ages and wears out). This could save you $1500 a year quite easily. 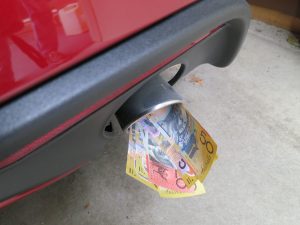 As great as that was, when we got rid of our last car in 2011, we jointly saved $15,000 a year compared to a two car household (including public transport costs, taxi fares, car hire and bike costs).

At the time of writing, this has added up to $170,000 making for a much shorter mortgage.

This is not as common in Australia but it is much more common in Germany. We have many friends there with one or no car and that includes friends with kids. Australia may be the land of the outback but in 2020, 77% of all kilometres travelled by passenger cars were in cities and urban areas because that’s where most people live [10].

So chances are you can sub out car trips for something cheaper like public transport, cycling, walking, doing something local instead, carpooling or combining your errands into fewer trips.

If the fresh air, exercise, company or time to read and relax isn’t enough motivation, the non-fixed car costs per kilometre (that is, everything besides registration, insurance and roadside assist) is about $0.50 a kilometre verses $0.05-$0.20 a kilometre for car alternatives.

As an example, to travel from our town to the nearest capital city and back costs $34-$50 depending on the time of day whereas it’s $120 by car. See going carfree for tips on how to free yourself from car costs altogether.

The price of fuel in Germany verses their lower real world fuel costs demonstrates that Australians have some buffer to play with in the face of rising fuel prices.

Fluctuating oil prices are hiding the decline of cheap oil and the rise of disruptive climate change so it would be wise not to bank on cheap oil in the future and reap the benefits of cheaper travel now.

[8] The Dog and Lemon guide and Auto Expert have quite a lot of information on the myriad of things that can go wrong with these technologies. Both sites are in the business of selling something (car reviews and direct car sales) but at least they’re honest about what can go wrong with cars and the costs involved.

So a small car averaging 7 litres/100km over a lifetime of 300,000km will produce 48.5 ton of C02 along with the estimated 12 ton to produce it, so we have a total of 60.5 ton. A long range electric car needs 20 ton of C02 for its manufacture and will produce 35 ton of C02 over a lifetime of 300,000km charging off the Australian grid for a total of 55 ton. This shows how close the two are, given that the original numbers are general estimates: